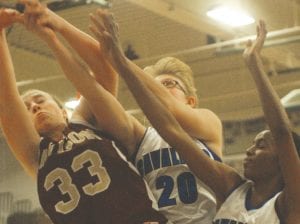 FLINT TWP. — Who said the Lady Cavaliers were out of the Big Nine Conference basketball race?

Carman-Ainsworth jumped back into it with both feet last Friday with an impressive, 68-50 win over Davison at home.

Jasmine Boyd had 21 points and 12 rebounds and three other Lady Cavs scored in double figures, as Carman posted its first league win after two losses and improved to 7-7 overall.

The Cavs got added life when Flint Powers Catholic lost to Flushing the same night, leaving those two teams at 2-1 and Carman and Davison at 1-2 after one round of league play.

Kinterra Tomlin added 12 points and Jasmine Jones and Ashley Hall tallied 10 apiece, as all nine Cavs scored. Carman dominated the boards, grabbing 18 offensive rebounds and scoring on many of them to frustrate the Lady Cardinals. Brandi Rimmer had five rebounds and Jones grabbed four.

“Most teams that control the boards win the game,” noted Vaughn.

Carman started slowly, falling behind, 16-13, after one quarter. But the Lady Cavs started turning the tide with a 13-11 second quarter to pull within 27-26 at halftime, then crushed the Lady Cardinals in the second half, 42-25.

Carman hosted Flint Southwestern in a non-league game Monday and lost, 54-41, to finish 1-2 against the three Flint city schools. The Lady Cavs were within 37-33 after three quarters, but missed their first 11 shots of the fourth as Southwestern pulled away.

Ashley Hall led Carman in this one with 15 points and Boyd scored 10.

The Big Nine season is in their hands in the Lady Cavs’ next two games. Carman,(7-8 overall, will host Flushing tomorrow and Powers next Friday, Feb. 11.