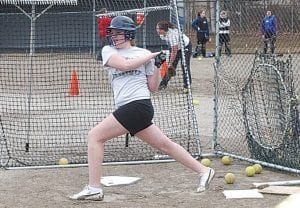 FLINT TWP. — With seven players graduated, the Carman-Ainsworth softball team finds itself in a reloading mode. Third-year varsity coach Joe Willett says he will rely on a crop of juniors that backed up the seniorladen squad last year as a base to build upon. With key positions still up for grabs, Willett is still assessing his team’s options for the upcoming campaign. Willet previously spent seven seasons leading the junior high softball team before taking over at the varsity program three years ago.

“We will be very young this year. I had one senior try out, and with no returning seniors, the team is mostly juniors with a few freshmen and sophomores,” Willet explained. “We are not looking too bad, and are focusing on hitting where we have struggled in the past. It looks like we have some more speed than we have had in the past and we’ll try to utilize that to our advantage.”

To say Willett lost some talent is an understatement, as shortstop Brittany Seavey moved on to Ohio Dominican on a full-ride scholarship. She’s starting at second base. Michelle Fisher is at Mott Community College playing fall and spring ball.

Several positions have been nearly nailed down with the final varsity roster to be released later this week. Willett says that Keri Hart, a junior on the squad since her freshman year, will pitch. Behind the plate will be junior Haley Snider, with freshman Morgan Borgerding seeing some action. Tiara Gooch, a junior from the basketball squad, is being looked at to take over third base. Kamrin Gold, another junior, likely could find herself at first base. Second base and shortstop are still positions being evaluated, but an early contender for shortstop lies in sophomore Kinterra Tomlin, another basketball player. The outfield also is shaping up nicely with Katlyn Koegel, who Willett calls a good all-around athlete rising to the top of the candidate pool. Shortstop could go to Tomlin, as Willett will continue to see who steps up this week before he finalizes the roster.

The Cavaliers open the season on April 15 at Lapeer East at 4 p.m.