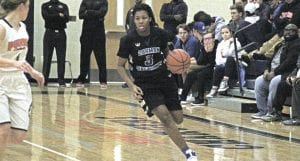 Carman-Ainsworth’s Destiny Strother continues to lead her team in scoring every game. She had 20 points against Flint Powers last Friday.

FLINT – Freezing rain canceled Carman-Ainsworth’s Tuesday game against Flint Northwestern. The game was postponed to yesterday well after we went to press.

Last Friday, Destiny Strother led the Lady Cavs with 20 points in their 56-47 win over Flint Powers at Powers. The win kept the Cavs undefeated Saginaw Valley League record in tact at 4-0 and moved them to 8-2 overall.

Powers led by a mere four points after one quarter, 14-10, but the Cavs outscored their hosts 14-8 to lead 24-22 by halftime. Powers wasn’t having any part of that and outscored the Cavs 18-10 in the third to reclaim the lead 40-34. That sparked another scoring run by the Lady Cavs who put up 22 points in the fourth to Powers’ seven.

Xeriya Tartt had 14 points for Carman-Ainsworth and Jessiana Aaron reached double figures with 10.