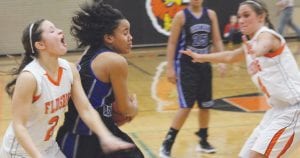 Carman-Ainsworth’s Ashley Hall (with the ball) goes hard to the basket.

FLINT TOWNSHIP— It’s been a bit of a tough year for the Carman- Ainsworth girls’ basketball team. Normally an area power, the Lady Cavs have hit a few snags along the way, but seem to be smoothing things out as the district playoffs creep closer. The chemistry is beginning to mount, and it showed on Tuesday when Carman-Ainsworth hosted a non-conference contest against Holly, who the Cavs dominated, 68-40.

The win boosted Carman- Ainsworth’s record to 6-13 overall, and gained the Lady Cavs a bit of momentum heading into the post season. The Cavaliers got it started quickly, outscoring the Bronchos, 22-9, in the opening frame. Holly was able to pick its game back up by the half, but Carman-Ainsworth was still able to maintain its lead heading into the break, 38-24. The Lady Cavs’ offense picked back up again in the third stanza, where it went on an 18-9 run. Carman-Ainsworth closed out the contest with a 12-9 fourth quarter, solidifying the 68-40 win for the Cavs.

Jasmine Jones shined in the big win, tossing in a team-high 12 points. Ashley Hall chipped in with 10 points, and Kinterra Tomlin came through for seven points. Denisha Gates, Kapri Thompson, Natalie Kincaid, Aliah Stinnett and Naryiel Purches matched each other on the court, with each credited with six points. Montreca Mull managed to pick up five points, and Tiara Gooch was good for four points.