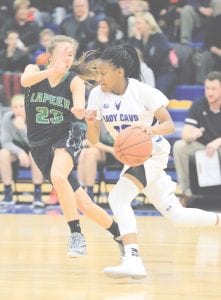 Carman-Ainsworth’s Chenelle King makes the pass in a regular-season game in January.

Carman-Ainworth, 17-3 overall, drew a bye in the Class A district at Flushing and faced Owosso, 3-17, in yesterday’s semifinals after press deadlines. Host Flushing, also at 17-3 on the season, took on St. Johns 10-11, which defeated Swartz Creek, 7-14, 63-59 in Monday’s district opener. Finals are at 7 p.m. at Flushing tomorrow.