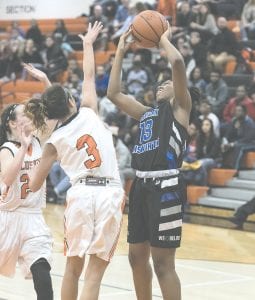 Carman-Ainsworth’s Destiny Strother launches the ball over a Flushing defender on Nov. 28.

The Lady Cavs took a 22-16 lead in the opening frame, but continuously pulled away in the following quarters. Carman-Ainsworth extended its lead to 38-19 by halftime and added a 14-4 third and 10-4 fourth to secure the win.

On Friday, Carman-Ainsworth was scheduled to face Flint Powers, but the game was canceled due to the snow storm. The two teams will face off on February 21 in a make-up game.

Carman-Ainsworth, 13-2, is at Davison on Thursday, Mt. Pleasant on Friday and Saginaw Arthur Hill on Tuesday. 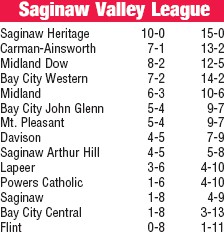