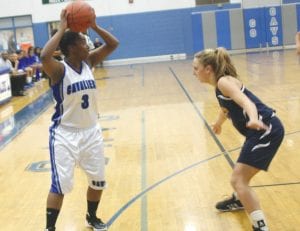 Carman-Ainsworth Kinterra Tomlin looks to pass to a teammate.

OWOSSO— Carman-Ainsworth’s girls’ basketball season came to its conclusion on Monday at Owosso High School. In the opening round of districts, the Cavaliers drew future Saginaw Valley Conference rival Saginaw.

In one of the higher scoring affairs of the season, the Lady Cavs fell just short against the Trojans, 83-70. Saginaw broke out to a 22-15 lead early on, and extended that lead, 44- 30, by halftime. The Trojans continued to thrive on that momentum and never looked back.

Kinterra Tomlin displayed one of her better performances of the year, as she poured in 16 points. Kapri Thompson scored 10 points, and Naryiel Purches came through with nine points, three steals, three blocks and four rebounds. Jasmine Jones also had nine points to accompany her two steals and two assists. Ashley Hall contributed with seven points, two steals and two assists.

The Lady Cavs hit a speed bump on Friday in what was their final contest within the Big Nine conference. The two teams battled to the wire, but Carman-Ainsworth was not able to hold on, as it fell to Davison, 49-43, dropping its overall record to 7-13. The Cavaliers would be the first to snag momentum, taking a 15-11 lead following one quarter.

The second quarter would be the exact opposite of its predecessor, as the Lady Cardinals walked into the locker room at halftime with the lead, 20-19. Carman-Ainsworth took the edge in the third frame, 12-10, but Davison would finish the game on a 19-12 run to secure the victory.

Jones led all Lady Cavs with 12 points, while Hall tossed in nine points. Sarah Satkowiak contributed with eight points of her own, and Tomlin came through with seven points. Purches was credited with four points, while Thompson scored three points.

With a final overall record of 7-14, the Lady Cavaliers will hang the sneakers up until next season.