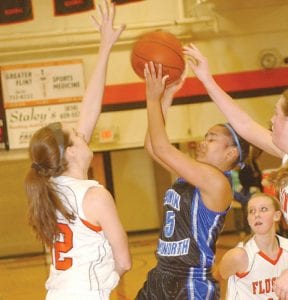 Ashley Hall and the Lady Cavs will go up against Flushing one more time next Monday.

FLINT TWP. — At their first basketball practice last November, Carman-Ainsworth coach Johnese Vaughn gathered the Lady Cavaliers on the gym floor and pointed something out.

“Look around you,” she said. “We do not have a banner on these walls. That has to be a goal.”

The Lady Cavs could change that situation in next week’s Class A district tournament, if they can just hurdle a mighty tall obstacle in their first test.

Carman will open the tourney at Saginaw Arthur Hill against Big Nine Conference rival Flushing at 5:30 p.m. Monday. The Lady Cavs have been beaten decisively by the Lady Raiders in both regular-season meetings this year, 81-69 on Jan. 14 and 69-41 on Feb. 4.

But if Carman can somehow buck those odds and knock off Flushing on Monday, the door would be open for the program’s first district championship. The Lady Cavs would next face Flint Northern at 5:30 Wednesday, a team they beat, 42-36, a month ago. A win there would put them in the March 4 final against one of three mediocre teams: Saginaw (9- 9), Arthur Hill (10-8) or Owosso (4- 14).

Carman’s 9-10 record isn’t glittering either, but the Lady Cavs have won two of their last three games, including a huge, 45-43 victory over Flint Powers Catholic that ended a fiveyear losing streak to their league nemesis. The win didn’t mean a league title for Carman, but the confidence boost could be a big factor going into the postseason.

The Lady Cavs have the talent and the depth to make it happen. Six different players have led them in scoring at various times this season, and they almost always get points from everyone who gets in the game.

Jasmine Boyd is usually the high scorer, and the senior forward has scored in double figures eight times. Junior forward Jasmine Jones is right behind her with seven double-digit games, while sophomore guard Ashley Hall has been there five times and led the team three times.

Junior guard Kapri Thompson (three), junior Tiara Gooch (two), sophomore Kinterra Tomlin (two) and junior Tierra Mitchell (one) all have hit double figures as well in the balanced offense. Senior forward Brandi Rimmer has a nine-point game and has been big on the boards along with junior Sarah Satkowiak.

The rest of the district schedule has Saginaw playing Arthur Hill at 7 p.m. Monday, with the winner advancing to play Owosso at 7 p.m. Wednesday. The title game is 6 p.m. March 4. The district champion will move on to the Fenton regional March 8 against the winner of the Saginaw Heritage district.

Regardless of how they fare next week, the Lady Cavs have already tripled the victory total of their last two seasons. That’s an impressive accomplishment, a sign of a program on the upswing — but it still doesn’t put a banner on the wall.