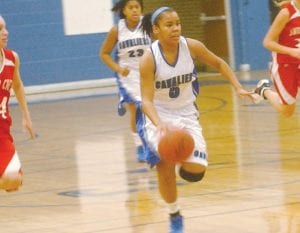 Ashley Hall led Carman-Ainsworth with 15 points in its loss to Royal Oak Shrine.

FLINT TOWNSHIP
— Most Big Nine Conference basketball coaches are glad they don’t have to face each other three times this season, like they did the past two years.

The downside, though, is that they have to fill 14 dates on their 20-game schedules with non-league opponents, and they have to search far and wide to find teams that will play them.

That means games against unfamiliar teams, like the Carman-Ainsworth girls’ squad has had to face the last two games. The Lady Cavaliers figured out Howell soon enough to pull out a 62-61 victory on Dec. 6, but they never solved Royal Oak Shrine in a 65-52 loss last Thursday.

Shrine is a Class C private school that won a district title last year, and the Lady Knights proved a formidable foe this year.

Carman-Ainsworth was tied with the Lady Knights, 15-15, after one quarter, but fell behind, 30-23, at halftime and trailed, 47-37, entering the final eight minutes. An 18-15 Shrine advantage in the fourth quarter created the final 13-point margin.

Ashley Hall had 15 points and Jasmine Jones scored 13 to lead Carman-Ainsworth, which fell to 3-2 on the season. Kapri Thompson added six points and Aliah Stinnett had five, as all 12 Lady Cavs played and nine of them scored. Kinterra Tomlin scored four, Jasmine Boyd and Tierra Mitchell had three apiece, Tiara Gooch scored two and Brandi Rimmer one.

The Lady Bobcats were scheduled to face a more familiar opponent in Flint Beecher on Monday night, but that game was postponed until tonight at Beecher.

Carman-Ainsworth will play next Tuesday at Hartland, then take two weeks off for Christmas and resume the season Jan. 3 with a home game against Grand Blanc.