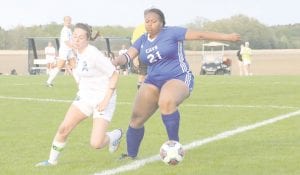 Carman-Ainsworth’s Karla Bell fights for the ball against Lapeer on May 14.

LAPEER –The Carman-Ainsworth girls’ soccer season came to a close on Friday after the Lady Cavs were defeated 8-0 by Davison in the Div. 1 district semifinal. Davison later fell to Grand Blanc 8-0 in the district title game.

On the other end of the bracket, Lapeer was defeated 8-0 by eventual district champion Grand Blanc. Grand Blanc was the only ranked team in the district, sitting at No. 4.

The Bobcats moved on to face Hartland in the regional semifinal on Tuesday at Rochester Hills Stoney Creek. The winner will play either Rochester Adams or Waterford Mott for the regional title on Thursday.