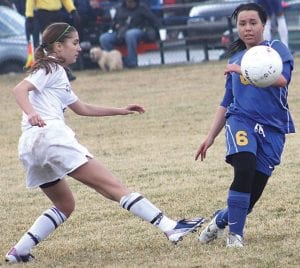 Carman-Ainsworth’s Melody Bamford (8) boots the ball away from Kearsley on Monday at home to open the season.

FLINT TWP. — First game jitters proved to make the difference for the Carman-Ainsworth girls’ soccer team that nearly staged a come-from-behind win against Kearsley on Monday. Instead, the Cavs swallowed a 4-3 loss.

“It was 50 degrees at game time with rain just before the game and then the sun came out in the second half,” said coach Jessyca Matthews. “The girls played a true tale of two halfs, very nervous in the first half, but turned it around in the second, just running out of time.”

Kearsley led, 2-0, in the first half on goals by Lauren Bellatosta unassisted at the 8:17 mark and Alexa Kehoe scored at 4:53.

Carman-Ainsworth trailed, 3-0, early in the second half after Kearsley’s Anessia Dell booted in a goal at 23:29, but Shelby Marsh found her legs to spark the Cavs’ comeback bid at 24:53 assisted by Emma Bostwick. Kearsley answered right back at 19:12 when Sidney Owens scored, but Alexis Thurber scored two unassisted goals at 10:41 and 1:40 to put the Cavs’ in position to tie. Time simply was the enemy. Keeper Rachel Roop made 15 saves.

“This was our first game and our first time outside at all this spring,” Matthews noted. “I’m not unhappy with what transpired today. The girls put things into play in the second half and our final two goals were two really good, solid goals. Once we got comfortable and shook off our nerves, it was just too little, too late.”

Carman-Ainsworth’s game against Lapeer East on Tuesday was canceled because of rain, and more inclement weather is forecast for Thursday’s meeting with Clio with high winds and rain again in the mix, Matthews said.