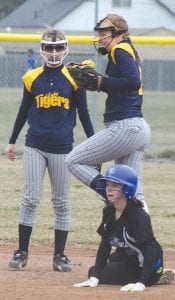 The Cavaliers played just a few innings at Bendle on April 17 before a thunderstorm washed away the doubleheader.

FLINT — Madison Cox pitched a no-hitter in the first game and Dannie Crowder hit a grand slam in the nightcap as Carman-Ainsworth mercied Flint Northern twice, 15-0, 14-0, in a Saginaw Valley League softball doubleheader Tuesday at Northern.

In the opener, Jessica Smith had a triple, Jennie Klapko and Elizabeth Roe both hit doubles, and Meghan Borgerding lashed a single to lead the offense.

In the second game, Crowder belted her grand slam to center field, and Samantha Johnston added a single, as the Lady Cavs opened Valley play at 2-0 and evened their overall record at 2-2.

The games were a makeup from last week, when Carman-Ainsworth saw two doubleheaders postponed by rain and cold weather. The other twinbill was a non-league affair at Bendle, where the teams got in a few innings before a thunderstorm blew into the area and washed away both games.

Carman-Ainsworth will play another Valley doubleheader today at Flushing. 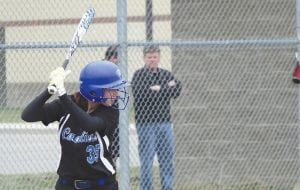 Carman-Ainsworth’s No. 35 waits patiently for the right pitch against Bendle on April 17 in a game that was canceled after the first inning because of rain.