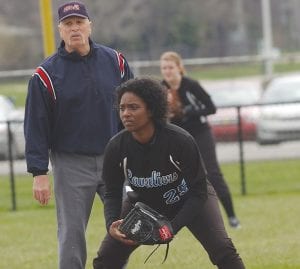 Carman-Ainsworth’s Kinterra Tomlin prepared for the ball to come her way in a recent contest.

FLINT TWP. — After more weather cancellations, the Carman-Ainsworth softball team was back in action Monday, hosting Big Nine rival Davison, but lost both sides of the twin bill, 3-2 in the opener and 13-3 in the nightcap.

A scoreless tie was broken by Davison, which scored its first run in the third inning. Davison added one more run in the fourth inning, but the Lady Cavs tacked on two runs in the fifth to pull within one. Davison, however, got the winning run in the bottom of the seventh inning.

The nightcap showed Davison ahead, 2-0, until the fourth inning when two more runs were scored. Davison broke the game wide open in the fifth scoring nine runs, invoking the mercy rule.

Kamrin Gold was 4-of-7 and drove in two runs, while Kinterra Tomlin was 3-of-7, including a triple, and drove in one run.

The Cavaliers face Clarkston today at home and host Flushing on Monday.