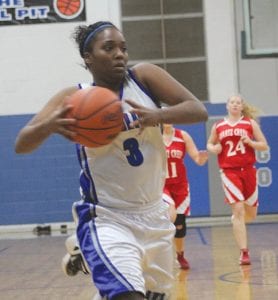 Carman-Ainsworth’s Kinterra Tomlin goes in for a layup on a fast break.

FLINT TWP. — Carman-Ainsworth beat one old adversary, but couldn’t get by another in its first two girls’ basketball games in the Saginaw Valley League.

The Cavaliers shook off years of frustration against Flushing and beat the Raiders, 42-37, in their Valley debut last Friday. The Cavs had struggled against Flushing in the last few years of Big Nine Conference play.

Carman-Ainsworth then lost to Flint Northwestern, 58-50, in a key early showdown Tuesday night at Carman- Ainsworth. The teams have been nonleague rivals in the past, but now are vying for a league championship with both schools joining the Valley this year.

Ashley Hall poured in 21 points against Flushing and Angel Proby scored 10. Denisha Gates had five. The Cavs started fast, jumping out to a 13-7 first-quarter lead and extending it to 22-12 at halftime. The teams played to an 8-8 standoff in the third quarter, and Carman-Ainsworth withstood a 17-12 Raider rally in the fourth.

No statistics were available on the Northwestern game by press time. The Cavs are 1-1 in the Valley and 2-3 overall.