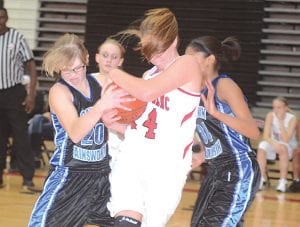 That would not be the case Tuesday, as the Cavaliers were unable to get the job done on the road, falling to their former Big Nine rival, 63-55.

You can bet the season-opener was on the minds of the Lady Bobcats, especially when you consider the significant lead they had throughout the course of the first contest. Grand Blanc stayed consistent across the board this time around, putting up their best efforts to close out the halves with a strong surge.

After scoring 13 in the opening frame, Grand Blanc would close out the first half with 16 second-quarter points. The Bobcats would only muster up 12 points in the third quarter, before they dropped 22 in the final frame to close out the Cavaliers’ chances of picking up a win. Carman- Ainsworth put up 11 in the first, 15 in the second, 12 in the third and 17 in the final frame.

Stopping the prolific Cavaliers is easier said than done, especially on a night where Carman-Ainsworth had a tie for the leading scorer. Kinterra Tomlin and Jasmine Jones tossed in 13 apiece or the Cavs, while R’Keshia Smith picked up nine. Kapri Thompson and Tiara Gooch recorded eight points apiece, while Aliah Stinnett and Naryiel Purches each scored two.

Grand Blanc was led by Taylor Garner, who put up a game-high 19 points to help the Bobcats secure the victory. Kara Puidokas also had a big game, throwing in 13, while Kendra Freund contributed with 12. Kelsey Carson and Erica Hines each posted a six-point night, while Brittany Bowie came up with three. Sydney Denicolo picked up two in the win.

Now at 4-3 overall on the young season, the Cavaliers will get a taste of what it will be like to compete in the Saginaw Valley beginning in the fall, as they travel to face future conference rival Saginaw Arthur Hill on Saturday.