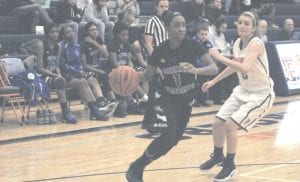 LAPEER – A battle between the No. 1 and No. 2 girls’ basketball teams in the Saginaw Valley League on Friday turned into just that as Carman-Ainsworth overcame a 17-point deficit in the third quarter to take the 54-47 win.

“This was a huge come back against a very good Lapeer team who was in second place in the SVL South,” said Carman-Ainsworth coach Lance Belil.

With the win, Carman-Ainsworth is 11-2 at still in first place in the SVL race.

Lapeer was ahead by a comfortable 10 points after the first stanza, 20-10, and a near-even second showed Lapeer with 12 points to Carman-Ainsworth’s 11 giving Lapeer the 32-21 halftime lead. The intermission put a chill on Lapeer, though, as the Cavs flipped the script in the third outscoring Lapeer 14-8 to trim the deficit 40-35. It was a pivotal quarter trailing by the 17 points and Carman-Ainsworth carried the momentum into the fourth outscoring Lapeer 19-7.

Xeriya Tartt led Carman-Ainsworth with 18 points and Destiny Strother had 17.

“Great defensive efforts by Bless Calhoun and Shakara Johnson helped keep the ball in CA’s possession at the end of the game,” said Belil.