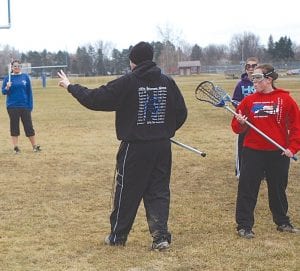 LAKE ORION — Because of a shortage of area referees, the Carman-Ainsworth girls’ lacrosse team was forced to host the Midland Chemics at Lake Orion High School last Wednesday. The Cavaliers battled through adversity, but were not able to continue their three game winning streak as they fell, 7-5.

The Cavs would strike first blood with a goal from Eva Andrews. Six unanswered Midland goals would put the Chemics up, 6-1. Carman- Ainsworth would make a late run, in which they scored the game’s final three goals, but it wasn’t enough as the Cavs fell to 3-2 on the year.

Eva Andrews of the Cavs had an exceptional game with a hat trick. LeDierdre McKinney and Kelsie Helton also hit the back of the net for Carman-Ainsworth. Jennifer Smith, who usually dominates draws, only won 5-of-19. Aside from giving up six consecutive goals, the Cavs also shot themselves in the foot with 12 turnovers. Allia Howard, one of Carman-Ainsworth’s leading scorers, went down with an ankle injury and did not return.

“Midland came out very aggressive and fast compared to past years, and our girls haven’t really seen that from anyone yet this year,” said head coach Tim Bausack. “We weren’t fundamentally sound or mentally tough enough to deal with it. We let the game slip away at the start of the second half because of it.”

The April 15 game scheduled against the Flushing Raiders was postponed, and has been rescheduled for May 10.