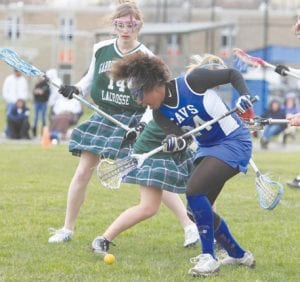 FLINT TOWNSHIP— The Carman- Ainsworth girls’ lacrosse team took a big loss on Tuesday, as they fell to Flushing, 13-5.

Leading the way for the Cavs was Allia Howard, who had three goals. Eva Andrews and Kelsie Helton had one apiece in the loss. Goaltender June Hall turned aside 11 shots.

“Flushing’s speed and talent was the story again. Flushing got out to a quick lead and decided to work on some set plays they have been working on,” said Cavs’ coach Tim Bausack. “We have so many players out that we had players in new positions and with a lot more playing time than they’re used to. So after the first few goals it became a game of trying new things for both teams with not much transition back and forth.”

On Thursday, the Lady Cavs fell just short of another win, as they were defeated, 12-10, by Saginaw Heritage.

A quick 3-1 lead for the Cavs would not last long, as three unanswered Heritage goals put the Hawks up, 4-3. The Hawks would continue to score goals, but not pull away completely, as they led, 7-5, heading into the half.

“I didn’t feel like we played a very solid game in the first half. Stuff we worked on yesterday in practice just didn’t transfer, and shot selection was questionable at times,” said Bausack.

In the final half, two straight Heritage goals extended the lead to 11-7, but Carman-Ainsworth quickly erased that deficit, trailing, just 11-10. The Cavs had a shot to tie the game in the final seconds, but the Hawks were able to get the empty net goal, as the Cavs’ June Hall was pulled from the net for the extra attacker.

Eva Andrews led the way for Carman- Ainsworth with seven goals, and also won 15-of-24 draws, including six to herself. Allia Howard scored twice, while LaDierdre McKinney tallied once. Both goaltenders made exactly nine saves apiece.

“Our girls never give in. Our leaders stepped up and put the team on their backs, and put us in position to force overtime,” said Bausack. “Shots are roughly a 50-50 proposition though, and the one we needed to go in just didn’t get into the net… it happens. I’m looking forward to our next game with Saginaw (Heritage) if we can find the umpires for it. We always play each other tight, so it should be fun.”

The Lady Cavs’ return to action on Wednesday at Midland High.