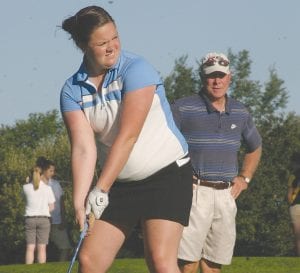 Keri Hart lined up a tee shot in the Lapeer Summer Tuneup.

LAPEER — Carman-Ainsworth got a good early look at its girls’ golf team this past week. The Lady Cavaliers opened their season in the Lapeer Summer Tuneup last Friday at Lapeer Country Club, then returned to Lapeer County on Tuesday for a non-league triangular at Metamora Golf and Country Club.

Carman shot 479 in the Tuneup to place 23rd in the 24-team field. Meghan Borgerding led the Lady Cavs with a 94 and Morgan Genore shot 122.

Utica won the team championship with 339, 15 strokes better than runner-up Swartz Creek. Fenton took third with 369 and Farmington Hills Mercy was fourth with 370. Defending champion Davison finished 19th with a 436, but that was with its B team. The Lady Cardinals’ varsity played in a Milford tournament the day before.

Taylor Clark of Utica repeated as individual champion with a 1-over-par 73, three strokes ahead of Alicia Flood of Kearsley. Haylee Zyber of Swartz Creek was third with a 78, and Utica took the next two spots with freshman Killian Casson shooting 79 and Julia Montgomery carding 82.