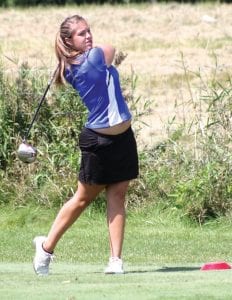 Carman-Ainsworth’s Meghan Borgerding follows through on her shot during the Lapeer Tuneup on Aug. 23.

FLINT TWP. — In the second Saginaw Valley League-South jamboree of the season, the Carman-Ainsworth girls’ golf team ended the day in fourth place with a score of 213 on Monday. Flint Powers Catholic topped the field with a 171, Davison placed second with 175 and Flushing came in third with 179. Flint Northwestern and Flint Southwestern did not field complete teams.

Meghan Borgerding put forth yet another impressive effort by tallying a 37 to lead the Lady Cavaliers, which turned out to be the low score overall on the day. Madison Cox recorded a 57 for Carman- Ainsworth and Mikaila Garrison recorded a 59. Alanna Gleason rounded out the Cavs’ scorecard with a 60.

Carman-Ainsworth welcomed Fenton for a non-league dual, falling to the visiting tigers Tigers, 189-211, on Friday. Borgerding continued her impressive year by shooting an eye-popping 38, followed by Garrison and Gleason, both who carded 57s. Taylor Jarnigin ended the day with a 59.

The Lady Cavaliers hosted Lapeer East for a non-league dual last Wednesday and were unable to get past the Eagles in a 197-208 loss. Borgerding was once again at the top of her game, carding a 40 while Jarnigin posted a 55. East was led by Sierra Woodcum’s 44 and Abby Kanasty added a 46.

Now that the SVL-South’s second jamboree has concluded, the Cavaliers will prepare to face Holly on the road today before going to the Davison Invitational on Friday. — B.P.