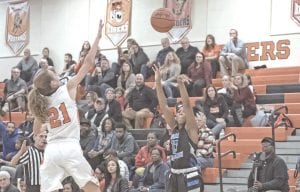 Carman-Ainsworth’s Destiny Strother hits a jump shot from the outside against Flushing during Tuesday’s season opener.

Carman-Ainsworth, 1-0, hosts Swartz Creek, 1-0, tomorrow at 7 p.m. The Cavaliers then travel to Southfield A&T on Saturday and Grand Blanc on Tuesday.