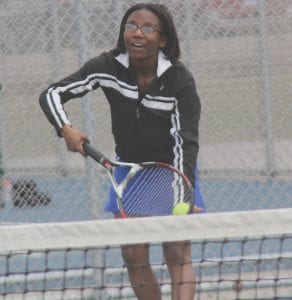 Carman-Ainsworth’s J’Lynn Corder, a freshmen, has been impressive at No. 1 Singles.

SAGINAW — It’s been a pretty impressive season for the Carman- Ainsworth girls’ tennis team this year. In particular, the play of J’Lynn Corder at No. 1 Singles has been superb. She finished as the runner up in the No. 1 Singles bracket of the Saginaw Valley League tournament. The rest of the Lady Cavs, however, are no slouch either, and as the postseason approaches, this could be one of the more dangerous teams in the area.

Rachel Alexander at No. 3 Singles has had a strong season, as has Cionna Orr at No. 2 Singles and Ashleigh King at No. 4 Singles. The Doubles tandems have seen quite a few faces, including Brenna Hudson, Hunter McFadden, Sara Hyde, Whitney Reynolds, Taylor Davis, Breanna Stubbs, Taylor McFadden, Ashley Whidbee, Christina Berry and Kayla Davis have also had strong seasons for the Cavs.