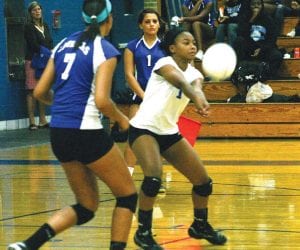 Monica Townsend digs a shot from her libero position in a match last season.

HARTLAND — The Carman- Ainsworth volleyball team had a roller coaster type of day at the Hartland Invite last Saturday, and coach Barb Hurand had to remind the girls that they need nerves of steel to ride the roller coaster season that just got started.

Point taken, after the team went 2-3 on the day, losing in the Gold Pool quarterfinals.

“We played pretty competitive for our first outing,” Hurand said. “I expect the roller coaster for the first couple games, but I had to remind the girls that a few losses are not going to make or break our season this early in.”

Monica Townsend had 75 digs, Jessica Smith had 41 kills and 44 digs and Jessica McClung recorded 27 kills and 38 digs. Kayla Tigner had 74 assists and Aubrey Mikovitz 31 service points, seven aces and 19 digs, while Deja Lester chipped in big at the net with three solo and 13 assist blocks.

“We had some great moments, and some not so good, but that’s part of the roller coaster ride that we have to ride,” Hurand noted.

The squad was back in action yesterday with back-to-back matches against Flint Kearsley and Durand and then Saturday features a trip to Linden for the Linden Invite.