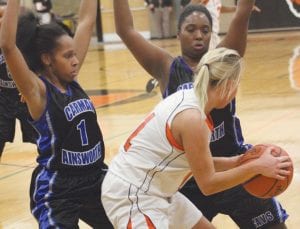 Denisha Gates (left) and Kinterra Tomlin trap a Flushing player along the baseline during their Jan. 25 game.

Ashley Hall hit for 23 points and Montreca Mull scored 13, as the Lady Cavs made up for a 58-50 loss at Northwestern on Dec. 18. Kinterra Tomlin added 10 points, Angel Proby scored eight and Randi Richardson had seven.

Carman-Ainsworth roared out to a 23-7 command in the first quarter and never let up. It was 43-23 at halftime and 62-33 going into the final eight minutes.