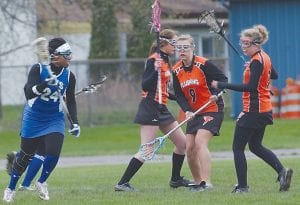 Scoring the three lone goals were Shakira Wilson, Eva Andrews and Allia Howard. Flushing’s Jordan Webber and Victoria Lockhart would steal the show for the Raiders, scoring five goals apiece. Part of Flushing’s lopsided victory is credited to their success in the face-off circle, as they won 14 of the games’ 20 draws. Eva Andrews won all six of the Cavs’ successful draws. Of the Raiders’ 28 shots, goalie June Hall was able to turn away 13 of them.

“Flushing has good team speed and they made good passes in transition,” said Cavs’ head coach Tim Bausack. They were too much for us and we didn’t do ourselves any favors when it came to winning loose balls. I certainly can’t fault our girls’ effort tonight and our goalie made save after save for us.”

The Cavaliers will hit the field again on Thursday against Saginaw Heritage.