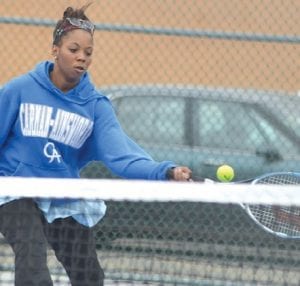 SAGINAW— The girls’ tennis season is quickly approaching its end, and will begin postseason play this week. Carman- Ainsworth will have its hands full at regionals, as they will compete in the Div. 1 No. 8 regional today at Saginaw Heritage.

A regional with that amount of fire power is never easy, especially when you consider the high level of talent displayed by the majority of the schools competing. Carman- Ainsworth started out the season on an extremely high note, winning their first two match-ups of the year without dropping a single match against Kearsley and Clio, respectively. The Cavs’ biggest struggles, however, have come within the Big Nine schedule. Carman-Ainsworth’s only conference win came on April 24, a 5-3 triumph over Davison. They just barely missed the mark with Davison on May 9, when the two squads drew even, 4-4.

Most recently, the Cavaliers finished the Big Nine tournament in last place, then suffered a tough loss to Fenton the next day. The silver and blue have the talent, as we’ve seen at different points of the season, but we’ll have to wait and see what they are capable of with their season on the line.

Likely, the biggest standout for the Cavs is Taylor Kost, who almost always picks up the win in the No. 1 Singles spot. Katie Wilson, Alexi Burnett and Yeon Jung Park round out the singles lineup, and have all had nice showings this season. Dishawna Psalms has also done a nice job filling in when needed.

The doubles tandems have also put on some amazing displays, especially at the No. 1 spot, where Rachel Alexander/Hailey Hutchins have reigned supreme for most of the season. Ashleigh King/Cionna Orr have had some nice wins as well, and Whitney Reynolds/Rachel Sherwin have also helped contribute to the Cavaliers success. Wrapping up the doubles line up is Mishall Khan/Taylor McFadden, who’ve chipped in to help the Cavs’ win as many matches as possible.