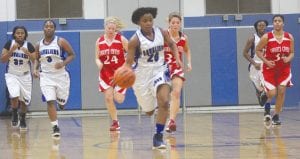 Bianca Jackson (20) and the Lady Cavaliers will charge into Saginaw Valley League play Friday against Flushing.

FLINT TWP. — Carman-Ainsworth will play its first girls’ basketball game in the Saginaw Valley League tomorrow night, when it hosts Flushing at 7 p.m.

The Lady Cavs and Lady Raiders are old friends from their years in the Big Nine Conference, but now they are vying for the SVL-South crown.

Carman-Ainsworth has struggled against Flushing in recent years, but the Raiders are in a rebuilding situation this season. They struggled to get past Swartz Creek in their opener, and Carman- Ainsworth beat those same Dragons by 24 points three nights later.

Carman-Ainsworth is 1-2 and hasn’t played since a 54-46 loss at Hartland on Dec. 4. The Lady Cavs are deep in experienced players and are led by seniors Ashley Hall and Kinterra Tomlin.

Flushing was 2-2 going into Tuesday night’s game against Davison and absorbed a 43-17 beating at the hands of defending Class B state champion Goodrich on Dec. 4.