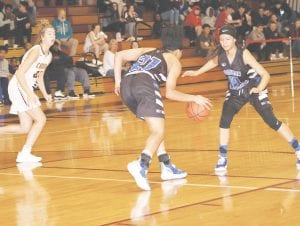 Carman-Ainsworth’s Aaliyah McQueen (21) breaks away on the steal as Rayven Brantley backs her up at Davison at Dec. 11. Photo by Lisa Paine

FLINT – The Carman-Ainsworth girls’ basketball team will play today against Goodrich in the inaugural Steve Schmidt Roundball Classic at Mott Community College. Flint Powers and Beecher are the other two schools in the Classic.

The day-long event is split into two sessions. The first session begins at 1 p.m. with a girls’ hoops match-up between Flint Beecher and Flint Powers Catholic. At 2:30 p.m., the Powers boys will take on Goodrich.

The gym will be cleared after the first session, with the second session opening at 6 p.m. as the Carman-Ainsworth girls take on Goodrich. At 7:30 p.m., the festivities will conclude with a boys’ game between Beecher and Carman- Ainsworth.