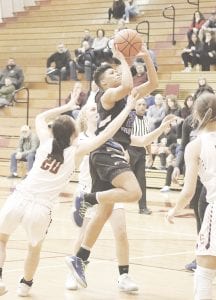 Carman-Ainsworth’s Aaliyah McQueen goes up for a contested shot against Davison on Tuesday. Photo by Kylee Richardson

DAVISON — The Carman-Ainsworth girls’ basketball team took down Davison 52-48 in overtime on the road on Tuesday. The score was knotted up at 44-44 as time expired in the final frame.

Chenille King put up 18 points, while Aaliyah McQueen had 17.

On Friday, Carman- Ainsworth bounced back from its first loss of the season to defeat Grand Blanc 64-44 on the road.