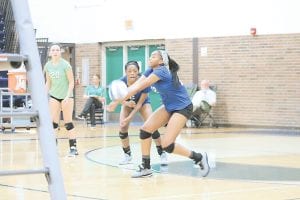 Carman-Ainsworth’s Angel Eubanks, right, keeps the point alive as Diamond Lester anticipates her next move against Lapeer on Sept. 11. Photo by Kylee Richardson

The Lady Cavaliers also went 1-2-3 at the Mt. Morris Tournament on Saturday, ultimately losing to Chelsea 15-25, 22-25 in the gold division semifinals.

Lester led Carman-Ainsworth with a team-high 46 kills along with 41 digs and 15 aces over the course of the tournament. Harmon added 43 assists, 19 digs and 10 kills. Dollinger finished with a team-high 60 assists and 24 digs. Eubanks had 19 kills and 22 digs. Johnson added 25 kills, and Thurston had 47 digs.