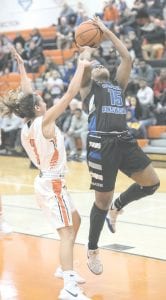 Carman-Ainsworth’s Arie Lewis hits a lay-up against Flushing during the season opener on Nov. 28.

The Motor City Roundball Classic hosts nearly 100 boys’ and girls’ basketball teams from Michigan and surrounding areas, showcasing the talents of many teams over the span of three days. Despite Carman-Ainsworth’s narrow win, individual stats were not reported prior to press deadlines.

Carman-Ainsworth, 5-0, heads into a run of home games, as it hosts Saginaw Heritage on Friday, Detroit Edison on Saturday and Flint on Tuesday as it continues its dominant season.