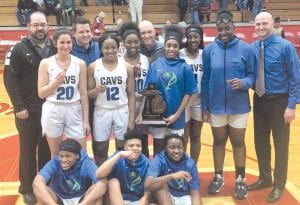 LAPEER — Carman-Ainsworth’s girls’ basketball season came to a close on Tuesday in heartbreaking fashion as the No. 4 Div. 1 ranked Cavaliers were eliminated in the regional semifinal, 54-49, against Davison.

The Cavaliers fell behind 14-7 in the first as University of Illinois commit Aaliyah McQueen missed the majority of the first quarter due to injury. McQueen returned in the second quarter and Carman- Ainsworth pulled the score to 26-20 heading into the locker room.

Davison caught fire in the third quarter, though, outscoring Carman- Ainsworth 16-11 for a 42-31 advantage. Carman-Ainsworth fought back in the final frame, cutting the deficit to just three at one point, but foul trouble put the game away in the final minutes as Carman-Ainsworth struggled to get the job done. 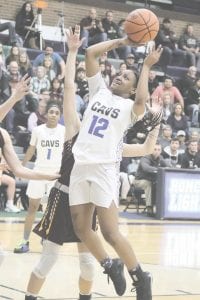 Carman-Ainsworth fell behind 10-8 in the first but caught fire in the second as the Lady Cavs scored 18 points, all on three-pointers, while holding Saginaw Heritage to seven points. In the third quarter, Carman- Ainsworth extended its lead to 44-24. Saginaw Heritage closed out the game with a 21-19 run.

Arie Lewis led the Cavaliers with 18 points. Jessiana Aaron had 17 points, including four triples. Chenelle King chipped in 11 points and Aaliyah McQueen had 12.

Last Wednesday, Carman Ainsworth eliminated Swartz Creek 68-36 in the semifinal. The game was knotted up at 13-13 after the first and the Cavaliers gained a 28-25 advantage at halftime. Carman-Ainsworth then heated up in the second half, outscoring Swartz Creek 20-4 in the third and 20-7 in the fourth.