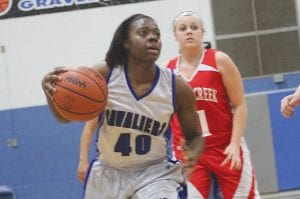 The Lady Cavs jumped all over the Lady Vikings from the start, taking a 26-8 first-quarter lead and stretching it to 38-16 at halftime. The third quarter was close at 18-16, but Carman- Ainsworth capped the victory with a 19- 2 fourth.