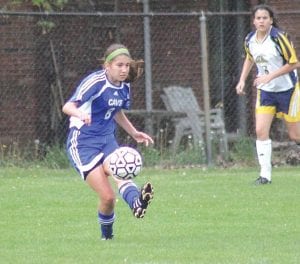 DAVISON — Familiarity with ones opponent can be a two-sided coin and that’s something the Carman-Ainsworth girls’ soccer team faces when it opens district play on May 29 in the No. 15-1 Davison district.

To wrap up the regular season, Carman-Ainsworth took on Swartz Creek last Friday, drawing to a 2-2 tie with the Dragons. Swartz Creek scored the goal when Ashlyn Neumann scored on a nice pass from Victoria Niles. Carman/Ainsworth’s top two offensive threats Jasmine Jones and Shelby Marsh got loose later in the half and each scored a goal. During the second half Swartz Creek took the play to Carman/Ainsworth from start to finish. Nicole Jewell and Morgan Kidder had a big part in that continuing to shut down Carman/Ainsworth’s top two offensive threats Jasmine Jones and Marsh noted Creek coach Steve Hockin. Victoria Niles scored the tying goal on a pass from Autumn Henry.

Coach Jessyca Matthews has noted all season long that this squad wants the wins and is self-driven to obtain them. The talent on the team is deep and starts with Jasmine Jones and Marsh and continues through the ranks with Yazmeen Jones, Savanna Lacey in goal, Amber Richard, Courtney Glinka and Jwi-Hye Han, just to name a few of the strong players.