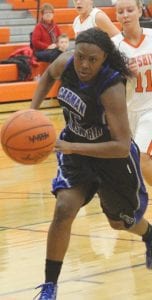 Montreca Mull hustles after a loose ball in last Friday’s game at Flushing.

FLINT — Carman-Ainsworth started and finished strong Monday night to earn a 57- 39 win over Flint Beecher in a non-league girls’ basketball game at Beecher.

The Lady Cavaliers jumped out to a 19-10 first-quarter lead and withstood a Beecher rally in the second to lead, 29-24, at halftime. Carman-Ainsworth put it away with a 15-7 third period and a 13-8 final quarter.

The Cavaliers lost a 49-33 decision at Flushing in a Saginaw Valley League-South Division contest last Friday. Carman- Ainsworth had trouble scoring and trailed, 13-6, after one quarter, 21-8 at halftime and 30-15 going into the fourth quarter. Tomlin led the Lady Cavs with 14 points and Natalia Kincaid had eight.

Carman-Ainsworth will host Flint Northwestern in another league game tomorrow. 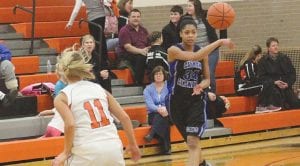