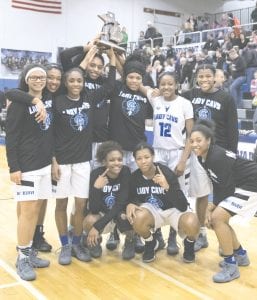 The Carman-Ainsworth girls show off their district trophy following their 63-45 win over Flushing on Friday.

DAVISON – The Carman-Ainsworth girls’ basketball team set aside Davison 63-44 in the regional semifinal on Tuesday. The Cavaliers grabbed a massive 22-6 lead in the first frame and never looked back, extending it to 40-22 by halftime. Carman-Ainsworth then edged out Davison 23-22 in the second half to take the win.

The Lady Cavs took down the reigning Class A state champions on Friday, 63-45, to win the district title. Carman-Ainsworth grabbed a 15-6 lead and extended it to 30-18 by half time. Flushing edged out Carman-Ainsworth 20-19 in the third, but the Cavaliers took the fourth 14-7.

“The girls have really bought into the motto that is on the back of their shirts, ‘N.A.M.E’, which stands for ‘not about me’. We are excited for the upcoming opportunity to compete at a state level,” said Carman-Ainsworth coach Lance Belill. “There are 32 teams left in the state and when you get to this point, anything is possible.”

In the Wednesday semifinal, Carman- Ainsworth took down Grand Blanc 54-22. Grand Blanc took a 13-10 lead, but Carman-Ainsworth heated up to take the lead by halftime, 25-15. The Carman-Ainsworth defense then dominated the Bobcats, holding them to just seven points in the second half while the Lady Cavs added 20 in the third and nine in the fourth.

“A great effort on the defensive end and a good team win,” added Belill.

On the other end of the bracket, Flushing took down Swartz Creek 42-28 in the other semifinal after winning 49-47 in overtime against Fenton in the district opener.