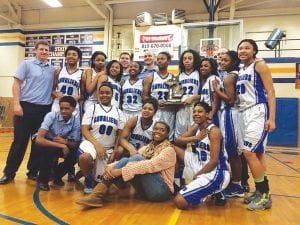 FLUSHING – Carman-Ainsworth had undefeated Flushing on the ropes for the entire second half before finally losing to the 10th-ranked Raiders 59-52 in a Class A girls’ basketball regional semifinal game Tuesday night at Flushing.

Before a packed house of 2,500, the Lady Cavs were within 3-5 points of Flushing for most of the last two quarters and pulled within 51-50 on a free throw by Chelsey Carpenter with 4:30 left. A free throw by Harmany Williams made it 53-52 with 2:45 to go, but the Cavs couldn’t score again, missing four free throws in the last 2:17, getting a shot blocked and turning the ball over twice in the last 45 seconds.

The close call came seven weeks after the Lady Cavs had lost to Flushing by 20 points, 54-34 on Jan. 20, ending the first half of their season at 5-5. But they went 10-4 from that point on to finish at 15-9 with their second straight district championship. Flushing, 24-0, moved on to play Saginaw Heritage, 20-3, in tonight’s regional final at Bay City Western.

“We had them right where we wanted them,” said first-year Carman- Ainsworth coach Lance Belill. “We played them very tough for four quarters. But Flushing’s a very good team. You take one thing away, they capitalize at the other end.

“We ended the season on a very good note, lost to a very good team and I’m very proud of how the girls played for four quarters.”

It looked like another blowout in the making when Flushing went up 10-0 to start the game. But Carman-Ainsworth closed to within 16-11 by the end of the first quarter and tied it 22-22 on a 3-pointer by Sydnee McDonald with 2:00 left in the half.

The Cavs never got the lead, but they closed within 31-28 early in the third quarter and stayed within striking distance most of the half. A full-court press disrupted the normally fluid Flushing offense, and the Cavs also dominated the offensive boards with 17 offensive rebounds and countless putbacks for baskets.

“Our defense got us back in the game, which it’s been doing all year long,” said Belill. “We really picked up the intensity on the defensive end and they had a tough time handling our pressure at some points.”

The flustered Raiders had two starters foul out, including dominant junior center Clare Glowniak, who exited with 2:17 left and just eight points for the night.

Williams led Carman-Ainsworth with 17 points, including a big 3-pointer that pulled the Cavs within 49-45 early in the fourth. McDonald finished with 14 hard-earned points, her second-lowest total of the season. She also had a big save on a ball out of bounds, passing to Carpenter, who converted it into a three-point play to make it 39-34 midway through the third quarter.

Carpenter was a demon on the boards with 12 total rebounds and nine off the offensive glass, which she consistently put back to score 11 points.

Carman-Ainsworth won its second straight district championship last Friday with a 78-44 rout of Davison at Kearsley. The Lady Cavs took command early with a 20-5 first quarter and pulled away with a 41-23 second half. McDonald had 26 points and 10 rebounds, and Shakara Johnson had eight points, 13 rebounds and 10 blocked shots. Williams added 10 points, Natalia Kincaid had nine points and six assists, and Carpenter and Cha’Quia Jones scored eight points each.

For all practical purposes, Carman- Ainsworth won the district title with a 66-59 overtime win against Lapeer in the March 4 semifinals. The Lady Cavs saw a 28-19 halftime lead dissolve in Lapeer’s 35-26 second half, but they pulled it out with a 12-5 overtime rally. McDonald had 34 points and 14 rebounds, and Kincaid had 10 points. Williams added eight points, and Johnson had six points to go with 11 rebounds.