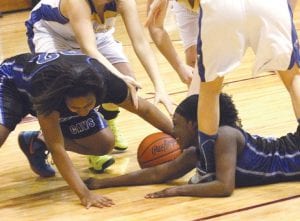 Natalia Kincaid (left) and Montreca Mull fight for a loose ball on the floor in Monday’s game against Kearsley.

DAVISON — Carman-Ainsworth shook off a cold first half and beat Flint Kearsley, 47-33, in the first round of the Class A girls’ basketball district Monday night at Davison.

The Cavs started their rally with five straight points that forced Kearsley to take a timeout with 2:57 left in the third quarter. When play resumed, Carman-Ainsworth came out in a full-court press that forced nine Kearsley turnovers and a jump ball in the Hornets’ next 12 possessions. The Cavs gained their largest lead, 41-23, early in the fourth quarter. 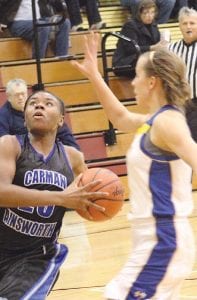 Carman-Ainsworth took on host Davison in Wednesday night’s semifinals. The Cardinals were Saginaw Valley League-South champions and beat the Lady Cavs twice in league play. The winner advances to the district final at 7 p.m. Saturday against the winner of the Swartz Creek- Lapeer West semifinal.