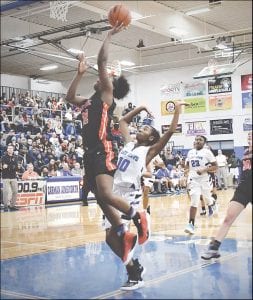 Carman-Ainsworth’s Dyemesheann Hoyle attempts to defend a lay up against Grand Blanc on Friday. Photo by Terry Lyons

BELLEVILLE – The Carman- Ainsworth girls’ basketball team notched its fifth-straight win on the season as it beat Grass Lake 58-55 at the Best of Michigan Classic at Belleville High School on Saturday. The win also keeps Carman-Ainsworth undefeated on the season.

Aaliyah McQueen racked up 21 points and 13 rebounds on the game. Arie Lewis chipped in 15 points.

Carman-Ainsworth, 5-0, is off until Dec. 28 when it faces Goodrich at the Mott Community College for the Steve Schmidt Roundball Classic.