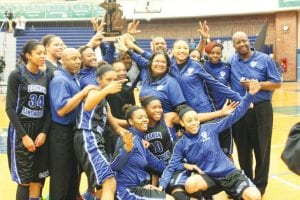 FENTON — Carman-Ainsworth didn’t want to settle for its first regional championship ever, but that’s what the Lady Cavs will have to do this season.

Five days after winning a Class A regional title in a thrilling overtime victory over Midland, Carman-Ainsworth lost to Canton, 62-45, in a quarterfinal game Tuesday night at Fenton. The Lady Cavs fell into a 14-5 hole in the first quarter and never got closer than 10 points again as their Cinderella season ended at 17-8. Canton, 21-4, moved on to Friday’s 1 p.m. semifinal game at the Breslin Center against fourthranked Grand Ledge, 24-2.

Carman-Ainsworth had already made history with the first regional title in the 28-year history of the school in last Thursday’s 70-65 win over No. 8 Midland in the regional final at Saginaw Heritage. But the Lady Cavs had their eyes set on the Breslin.

“It’s bittersweet, but we told the girls there’s nothing for them to hang their heads about,” said Cavs coach Johnese Vaughn. “I’m very proud of them. We definitely made history. We’ve been saying all along: Leave a legacy. They put in the work, they made a commitment, and it got us here.”

The Cavs fell into an immediate 7-0 deficit and struggled all night to stop Canton’s inside game. Paige Aresco had 28 points, including 12-of-16 freethrow shooting, and 6-foot-1 center Taylor Hunley added 12 points and dominated the backboards, rarely allowing Carman-Ainsworth a second shot. The Chiefs moved the ball well against the Cavs’ press and made them pay dearly for fouls, sinking 24-of-31 free throws.

Carman-Ainsworth fought to the end and three times pulled within 10 points of the lead in the second half, the last at 50-40 with 3:07 left. But Canton stalled away much of the remaining clock and hit its free throws to seal the win.

Last Thursday’s win over Midland was arguably the biggest in Carman- Ainsworth’s history. The Cavs came back from a nearly game-long deficit to avenge a 74-60 loss to the Chemics on Feb. 4.

McDonald, a junior transfer from Hamady, scored 28 points, including 11 of the Cavs’ 12 points in overtime. Down 63-59 midway through OT, McDonald scored eight straight points to give the Cavs a 67-63 lead with 35 seconds left. Midland pulled within 67-65 eight seconds later, but McDonald sank three foul shots in the last seven seconds to clinch it.

Stinnett added 19 points, five rebounds and seven assists, scoring 14 of her points in the first half to keep the Cavs in the game. Midland led by 8-9 points several times in the half and took a 34-28 advantage into halftime.