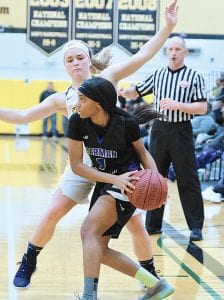 Carman-Ainsworth’s Jessiana Aaron looks for an open teammate against Goodrich on Dec. 27 at the Steve Schmidt Roundball Classic. Photo by Dan Brovant

FLINT TWP. — The Carman- Ainsworth girls’ basketball team continues to power through the season winning its seventh straight game, beating Saginaw Heritage 58-39 at home on Tuesday. The win keeps the Lady Cavs undefeated on the season at 7-0.

The reigning two-time state champion Saginaw Heritage has been a thorn in Carman-Ainsworth side, eliminating Carman-Ainsworth the past two years in regionals before advancing to win the state title and taking the last nine match-ups between the two teams.

Carman-Ainsworth led 17-12 after the first quarter before the Hawks grabbed a 23-22 lead with just under three minutes left in the first half. The Lady Cavs then scored the next 14-of- 15 points to take control in the third quarter. Carman-Ainsworth outscored Saginaw Heritage 10-7 in the third and 19-9 in the fourth to take the win.

Carman-Ainsworth is at Harper Woods Chandler Park on Friday.