Lapeer Furniture & Mattress is Settling in 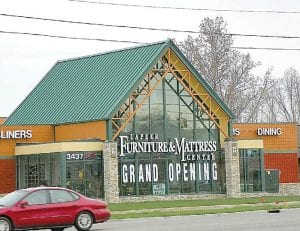 FLINT TWP. — Business on bustling Miller Road had been “reasonably good’’ and Jeff Moran, owner of Lapeer Furniture & Mattress Center, was planning to renew his lease when a huge opportunity presented itself.

Peerless Mattress & Furniture, across the street a 3437 Miller Road, announced plans to close its huge, modern showroom and warehouse, after 85 years in business.

The Peerless store was more than twice the size of Moran’s 22,000 square-foot store. It was a steel and glass showplace with peaked roof lines and architectural angles compared to his square-box, concreteblock store that had been extensively renovated from an automotive repair and supply shop.

Peerless shut down in the spring of 2009 adding one more vacant building to a growing list of economic casualties in the Miller Road retail hub.

“For me the question was not ‘did

I want to buy the business, it was ‘how could I?” Moran said.

Two “big” banks turned down his request for a small business loan but Moran was determined.

“I wasn’t going to give up,’’ he said. “I wanted it too badly and I already had all the information I needed. I had the numbers to show that the business could continue to grow and thrive, all I needed was someone that actually wanted to lend money and would take a look at the numbers.’’

Moran decided to return to his roots in Lapeer where he operates his other store. Loan officers at Lapeer County Bank & Trust accepted his loan application, helping him to work out financing that combined funding from the Michigan Small Business Administration and a small business loan.

By Sept. 1, a minor facelift and renovations at the new store were underway.

“It was just waiting for someone that would rejuvenate it and fill it up with beautiful room displays of furniture and accessories.”

By opening a space in the back, Moran doubled his mattress display area. And with more than double the space of his old store, there was room for warehouse space that now serves as a distribution center for both the Flint and Lapeer stores.

At more than 50,000 square-feet, the store claims one of the largest displays of furniture and mattresses in the area, a 4,000-square-foot gallery of American-made, custom upholstered furniture by England Furniture, a La-Z-Boy company, that allows customers to choose a frame and select from more than 400 fabrics and leathers. Delivery is within 21 days.

The move created five new jobs with projections for 10 more by the end of the year, Moran said.

Business in the new spot has been good as Moran starts to see growth in the economy. Customer response to the move has been very favorable, he said.