Lapeer holds court with first of series of quadrangulars 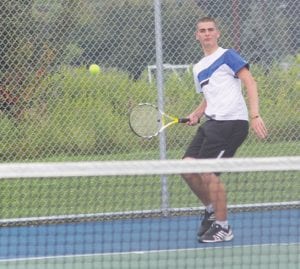 LAPEER – It was a rude awakening for the Lapeer Lightning, Davison, Brandon and Carman- Ainsworth when they arrived at the Lapeer Optimist Tennis Courts on Wednesday. Overnight rains on Tuesday had washed a good deal of mud and water onto the singles courts, making them unplayable.

A contingent of maintenance workers, Lapeer COO Tim Zeeman, Lapeer coach Oscar Rodriguez and others made quick work of scraping, spraying and leaf blowing the courts to make them safe for the players.

Once that was put behind them, threatening skies turned the scoring system in 8-game Pro sets instead of the traditional set scoring. Brandon and Carman- Ainsworth had to forfeit several doubles positions, but Lapeer and Davison put up great efforts, eventually tying with 11 points each. Brandon was a distant third with four points and Carman-Ainsworth earned two.

Rodriguez said he had expected more kids to come out for tennis with the consolidation of Lapeer East and Lapeer West, but he ended up with 20 kids.

“The other fall sports such as football and soccer continue to pull kids out of our sport. It’s disappointing,” said Rodriguez.

In the end Davison’s Kyle Haines beat out Brandon’s Hunter Austin, 8-6 at No. 1 Singles for the medal. At No. 2, Davison’s Trifon Bisbikus beat Lapeer’s Justin Hackett 8-4. At No. 3, Brandon’s David Baldwin beat Carman-Ainsworth’s Vlad Li 8-2 and at No. 4, Lapeer’s Luis Gonzalez shut out Davison’s Joe Hayes 8-0.