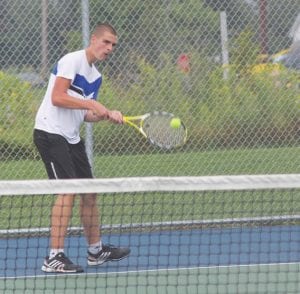 Carman-Ainsworth’s Damon Haley returns a shot against Brandon at the Lapeer Lightning Quad I on Wednesday morning.

LAPEER — Now that the Lapeer Lightning athletic squads have had the summer to go from two separate programs to a single cohesive unit, the boys’ varsity tennis team hosted the new tradition with style with a quad meet yesterday.

“Each team has had their fair share of wins in previous Eagle Quads,” said Lapeer coach Oscar Rodriguez. “This quad should be very interesting.”

One factor Rodriguez mentioned earlier this summer was that he was hoping to have as many as 40 kids come out for the team this year. While this would have allowed him to run both a varsity and a JV program, as well as consolation flights at No. 5 and No. 6 Singles and Doubles, that level of participation never truly came to fruition.

“We have a new team leader in Dylan Graves who will be playing No. 1 Singles and everything after that is still being decided,” Rodriguez said. “Currently we have 17 kids and will know much more after this week.”

Because of all the matches that will be taking place, the Lightning will be hosting this event at both the West campus and Cramton Park to try and keep the overall time frame to six hours or so. The event will also be getting an early start at around 8:15 a.m. to help make sure everything goes according to plan.

“We have four quads this fall and our goal is to get an idea who’s going to lead our team at the singles positions as well as doubles,” said Rodriguez. “We always have a lot of interest in singles, but I want to know who going to lead our doubles teams.”

Prior to that, East and Brandon ended their 2013 Metro schedules with records of 3-2 and 2-3 to finish in third and fourth place, respectively. Results for Carman-Ainsworth during last year’s regular season include beating Powers 7-1 on Sept. 17 and on Aug. 22 the Cavs placed fourth at the Owosso quad. As for Davison, it lost to Heritage 6-2 on Sept. 23.

Now that the Lightning are in their initial season as members of the SVLSouth, what was once simply an area rivalry with Davison and Carman- Ainsworth now has a much deeper meaning. All of these programs have had their share of struggles over the past several years, though, leaving the door wide open for any of them to rise to the occasion and win this event.

“Playing in the Heritage Quad (on Aug. 25) will give us an opportunity to play two schools in the North division of the Saginaw Valley,” Rodriguez said. “These matches may be needed for seating in the Valley tournament.”