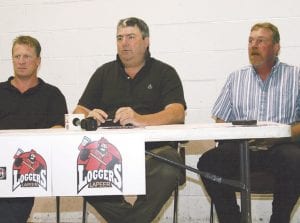 LAPEER
— The new All American Hockey League Lapeer Loggers named the team’s coach and ownership Monday and officially introduced them to the public in a press conference Tuesday at the Polar Palace Arena Complex, home to the new team.

Lorne Knauft, a former Flint Generals player in the United Hockey League from 1993-2008, has been hired to coach the team that begins its inaugural season in 2010-2011, starting with a home and home stand against the Cincinnati Queen City on Oct. 22. Team owner George Harrison, who hails from Sarnia, made the announcements, flanked by Knauft and Chuck Harrison, who will run the promotions department for the Loggers, reaching out to the Lapeer community, then Flint and beyond.

“I want to thank everyone for coming out today for the kickoff of the Lapeer Loggers, proud member of the All American Hockey League, a Single A developmental league that puts players into the next level that the Flint Generals played at,” said George Harrison. “We are a six-team league and come to Lapeer after pro hockey failed in Flint. We don’t expect to be a replacement for that, but do expect to provide good family entertainment. 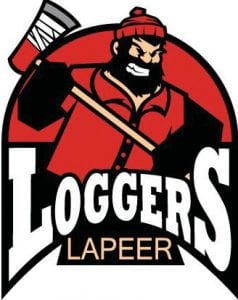 “We’ve assembled a good crew with our General Manager of Tyler Harrison, a graduate of St. Cloud University in Minnesota. He graduated with a degree in sports management. Chuck Harrison will handle promotional venues in Lapeer and Flint. To my left is Lorne Knauft, recently announced as our coach and this will be his inaugural coaching stint.”

“People asked, why Lorne Knauft,” Harrison said. “After 15 years of knowing Lorne, I know him to be a stand-up guy, and even though we didn’t always agree, I made the call and knew I was getting the right guy for the job.”

“I am very, very, very excited about the opportunity and have contact with former Generals, Border Cats and others to build the team,” Knauft added. “I’m looking at Lapeer, especially, and hope for a good turnout of possible players to put together the best team for the area.” “Anything less than a championship, then we are here for the wrong reason,” Knauft said of the Loggers’ expectations. “I want to coach the same way I played. I won’t lie to you. I have contacted former Generals players and we may very well see them on the team.”

During his 11- year professional career, Knauft, a Swartz Creek native and construction/ inspection business owner, notched 115 goals, 254 assists for 369 points, and 1,285 penalty minutes. His physical brand of hockey made him a fan favorite, something he hopes to bring to this new team.

Harrison added that he’s looking for good ties to the community and stressed that this team is not a Flint team, but a Lapeer team: “We’re here for the long haul and hope the community embraces us.”

Knauft added, “I’m a real big believer in treating people how you want to be treated and we’ll bring that to our fans.”

Harrison then explained the team’s new look and logo.

“Our new logo is red, white and black from the Ottawa Senators. This is a Lapeer team and it will be the fabric of the community. We will use the great facilities here at the Polar Palace to get people into the building,” Harrison said. “I’ve had comments about being from Canada, but I’m American. I went to school here, grew up here.”

The almost-completed logo bears a lumberjack sporting hockey gloves, and in the final version, he’ll have skates over one shoulder and a more esthetic Lapeer Loggers typeface. As Harrison noted, it’s a start in giving the team its identity.

“Some teams have said that they are concerned that we may be too talented to play,” Harrison said. “I’m taking that with a grain of salt. We’re in the infancy of the program, we have a lot of interest in the area and that will help us get the best of the best and put local kids on a team with guys who have played pro hockey.”

Last Friday, the team announced its upcoming tryouts and training camp that will run Oct. 8-10 at the Polar Palace. The camp is open to anyone wanting to play for the Lapeer Loggers. Attendees will be split into teams, with each team playing three games. Then, a final scrimmage and skills competition happens on Sunday, Oct. 10 for those selected to the team. Camp is open to the public for free, giving fans a good look at their new Lapeer team. Lapeer Loggers staff also will be on hand to answer fan questions. The camp cost is $200 per player. Those interested should contact team General Manager Tyler Harrison, at tharrison@lapeerloggers.com.

Fans can get a jump on the season as season ticket packages also have been announced. General admission season ticket prices are $189 or Sawmill season general admission is $235. The team will bear the slogan “A General Return to the Glory Days” on their jerseys as a nod to the former Flint Generals and their brand of hockey. Details: www.lapeeraahl.com
or email info@lapeeraahl.com.