Lapeer Loggers off to strong start in opener 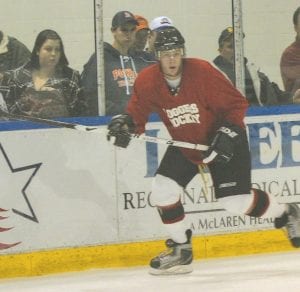 The Lapeer Loggers played their first home game to a sellout crowd at the Polar Palace last Friday.

LAPEER
— The All American Hockey League’s Lapeer Loggers played their first-ever regular season game at the Polar Palace last Friday, selling out all 1,240 seats. The contest itself wasn’t what the organization had been hoping for, though, losing to the Troy Bruins, 3-2.

After the first period came and went without any penalties or changes to the scoreboard, Lapeer’s Derek Osborne was able to pocket the initial goal of the night at 2:37 of the second on the Albert Mitchell pass. The Loggers’ lead wouldn’t last, though, as Troy answered back with scores by Todd Swenson at 15:00 and Chris Tasic at 15:48 to end the middle stanza with a 2-1 advantage.

In the third, Jeff Amadio locked the score up once more for Lapeer with help from Brent Sullivan and Osborne, but that’s as close as it’d get, as the Bruins’ Lee McClure connected on the game-winner for Troy at 15:26 on the Brian Cooke assist. In net, Dave DeSander got the loss for the Loggers despite making 45 saves on 48 attempts. For Troy, snatching up an assist each were Brian Cooke, Kevin Lee and Todd McIlrath and goaltender Rob Mattinson swatted aside 35 of the 37 shots sent his way. Overall, Lapeer had eight penalties for 16 minutes, as opposed to the Bruins, who had nine infractions for 18 minutes in the box.

That set the stage for what was probably the most exciting game of the 2010 AAHL season, yet, as the Loggers managed to pull off a 5-4 overtime victory at home Saturday against Queen City. Once again Lapeer jumped out to an early onegoal lead when Gordie Brown hit nothing but net at 9:48 of the first period with help from Sullivan and Mitchell on the power play, a feat the Storm duplicated at 14:59 and 17:50 off the sticks of Peter Drikos and Mike Looby to go up 2-1. In the second Queen City extended that distance to 3-1 at 1:29 when Justin Niles made good with a man advantage, but the Loggers struck back with a vengeance, posting scores from Tyson Theaker at 8:51 on the Brent Sullivan pass and Mason Cossette at 8:56 on the assist from Ryan Howarth, respectively, to once again knot things up at 3-3.

In what amounted to a fairly clean final session with only three total penalties being called, Lapeer threatened to win this one in regulation at the 48 second mark when Howarth lit the lamp with help from Brown and Sullivan. Instead, Queen City stood strong until the end, an effort highlighted by Joe Rackett’s short-handed penalty shot connection at 15:23. In the extra session, Osborne wasted little time in becoming the evening’s hero, scoring 98 seconds in unassisted to give the Loggers’ franchise its firstever victory. Between the pipes, DeSander faced 38 shots on goal for Lapeer, stopping 34. On the flip side, Tyler Gallant gave a strong defensive showing for the Storm, swatting 34 of the 39 pucks sent his way.

Overall, the Loggers spent 20 minutes in the box on 10 penalties, while Queen City was called for nine on-ice infractions, which equated to 18 penalty minutes.

Lapeer hosts Indiana Friday and Nov. 5 at 7:30 p.m., and Saturday the squad is at Queen City.