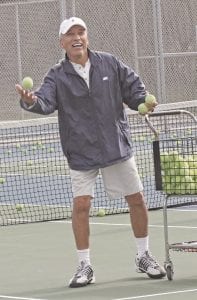 CINCINNATI – Gilbert Rincon, Director of Tennis at Genesee Valley Tennis Center, was honored on Aug. 18 as Michigan’s Pro of the Year at an awards dinner at the Western & Southern Open. Rincon, a Lapeer native, has been at GVSC since 1995. He has been chosen to participate in the USTA High Performance Continuing Education Program, which is run annually in conjunction with the U.S. Open in Flushing Meadows, N.Y., on several occasions. He competes on the senior circuit with his daughter, Monica, an Ohio resident who was All-State at Lapeer West before moving on to a very successful career at Ohio State. She’s a member of OSU’s Tennis Hall of Fame.

Rincon is annually the teaching guest pro at a free summer camp for middle school and high school kids put on by Lapeer High varsity boys’ and girls’ coach Oscar Rodriguez. He was also on the courts last Sunday teaching a lucky player before the start of the annual Lapeer Optimist Tennis Open tournament. – L.P.