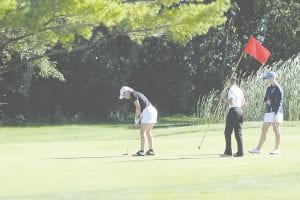 Teams will travel to Lapeer Country Club tomorrow to compete at the Lapeer Tune-Up.

LAPEER – Some of the top girls’ high school golf teams from across Michigan will be traveling to Lapeer tomorrow for the annual Lapeer Tune-Up tournament. Held at Lapeer Country Club, Lapeer’s varsity squad will play host to a field of 20 teams, including last year’s Div. 1 state champion, Rochester.

“It’s one of the first tournaments of the year, so for the schools that are coming, it’s the first time they can play,” said Lapeer head coach Steve Carlson. “It’s exciting to find out how good your team is and how good the other teams are, also.”

Of the 20 teams that will be in action, at least seven of them were state-ranked last season, according to Carlson. Those teams included Almont, Birmingham Seaholm, Cranbrook, Lapeer, Lake Orion, Rochester and South Lyon.

Last year, Lake Orion took home first place at the Tune-Up, finishing with a 339, four strokes ahead of second-place Lapeer. Third place went to Bloomfield Hills with a 344, South Lyon was fourth with a 346 and Birmingham Seaholm was fifth with 353.

“There’s a lot of very, very good teams,” noted Carlson of the field. “We are looking at some tough competition.”

The talent-heavy tournament will kick off tomorrow with a shotgun start at 8:30 a.m.