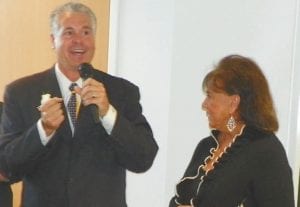 White carries more than 25 years of experience in the industry, all of which have been with General Motors, where he has had a successful career in operating the day to day business within a dealership.

Growing up in a family with strong moral beliefs and hard-working values, GM has been in Mr. White’s blood since he was a child. With a father who was a skilled electrician for GM for more than 30 years, White learned at a young age the importance of integrity in work and life. Those lessons have proven through in his time at The Patsy Lou Automotive Group as he has brought those American and GM standards to the forefront.

Coining the term, “The All American Corner”, Larry has shown where his passion lies. So when it came to renovating the dealerships, Patsy Lou and Larry stood behind GM and Flint, the birthplace of General Motors, by only using local, union labor.

After five years of working for Williamson, she said she feels very confident in her decision to pass the torch to White.

“He shares my vision in this town and the people here who have supported us through all the years.” said Williamson. “Larry stands behind his motto of World Class Service before and after the sale and he requires our Patsy Lou team to live up to it as well. I see the joy in his face every time he is able to help a customer achieve what they are looking for, which is why I feel so comfortable and excited to share my dream and hard work with him. I know Larry will soon become the owner and dealer I will be proud of and the community will appreciate”.

As shared spokesperson for the dealership, White known for his quick wit and approachable demeanor. Upon speaking with him it was quite evident that this rare loss for words was confirmation of his gratitude.

“Words cannot express the opportunity that Mrs. Williamson has given to me, so all I can do is show her my appreciation by executing our goals to the best of my ability,” said White.

One of those goals being to one day grow his business to 10 dealerships; all of course being American brands. — G.G.