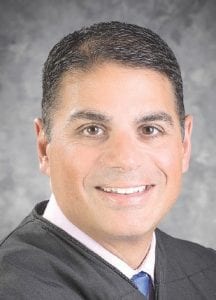 “We want every person who interacts with the judicial system to know that they will get a fair shot by an experienced and respected judge,” Whitmer said.

Latchana currently serves as a Judge with the 67th District Court of Genesee County, a position he was first elected to in 2010. He also presides over the Adult Felony Recovery Court Program under the 7th Circuit Court and has conducted several trials as a Circuit Court Judge.

Prior to his time on the bench, Judge Latchana was a private practice attorney specializing in criminal matters and family court litigation.

He also previously served as an attorney with Johnson & Wyngaarden, P.C. and as an assistant prosecutor with the Genesee County Prosecutor’s Office.

Latchana is the Executive Board President for the Genesee County Chapter of Families Against Narcotics and a member of the Statewide Drug Court Treatment Advisory Committee. He holds a Bachelor of Arts from Michigan State University and he earned his Juris Doctor degree from the Wayne State University Law School.

Latchana lives in Davison with his wife Elizabeth and their three children.

“I am honored and humbled to have received this appointment to the Genesee County Circuit Court,” Latchana said. “As a District Court Judge, I have endeavored to be fair, impartial, efficient and learned in the law. I look forward to taking that same work ethic to the Circuit Court and serving this community for many years to come.”

This appointment was made to fill a partial term, which expires at noon on January 1, 2021, after Judge Richard B. Yuille stepped down.

If Latchana wishes to seek a full six-year term, he would be required to run for reelection in November of 2020.

Applications are due March 13 for an appointment to fill Latchana’s vacant seat on the 67th District Court.  Because the governor will not make an appointment until after the April 23 deadline to file for the November elections, the appointee will serve out the remainder of Latchana’s term, which expires in 2022.

Whoever receives the appointment can then run for election to that seat next year. It is a six-year term. – G.G.